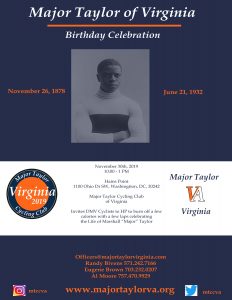 The Major Taylor Cycling Club of Virginia invites you to join other Major Taylor Cycling Clubs across the country in honoring Marshall Walter “Major” Taylor (November 26, 1878 – June 21, 1932), who was an American professional cyclist.  This is the Virginia chapter’s inaugural Major Taylor Birthday ride that it will be hosting at Hains Point Park.  The club will provide the history of Major Taylor before and after the ride.  The ride is from 10:00 am till noon starting in the Golf Academy Parking Lot.

Major Taylor became the first African American to achieve the level of cycling world champion and the second black athlete to win a world championship in any sport (Canadian boxer George Dixon, 1892 was the first). He was also a national sprint champion in 1899 and 1900. He raced in the U.S., Europe and Australia between 1901 and 1904, beating the world’s best riders. After a two-and-a-half year hiatus, he made a brief return in 1907, before retiring aged 32 to his home in Worcester in 1910.   Come burn some Turkey off with a few laps to honor Major Taylor.